An ever-growing number of persons from various backgrounds are becoming interested in the Orthodox Church. These individuals are discovering the ancient faith and rich traditions of the Orthodox Church. They have been attracted by her mystical vision of God and His Kingdom, by the beauty of her worship, by the purity of her Christian faith, and by her continuity with the past. These are only some of the treasures of the Church, which has a history reaching back to the time of the Apostles.

In our Western Hemisphere, the Orthodox Church has been developing into a valuable presence and distinctive witness for more than two hundred years. The first Greek Orthodox Christians arrived in the New World in 1768, establishing a colony near the present city of St. Augustine, Florida. One of the original buildings in which these immigrants gathered for religious services is still standing. It has recently been transformed into St. Photius’ Shrine by the Greek Orthodox Archdiocese. The Shrine, named in memory of a great missionary of the Orthodox Church, honors those first Orthodox immigrants. The chapel serves as a national religious landmark, bearing witness to the presence of Orthodoxy in America from the earliest days of its history. The next group of Orthodox Christians to emerge on the American Continent were the Russian fur traders in the Aleutian Islands. They, too, made a great contribution.

The Orthodox Church in this country owes its origin to the devotion of so many immigrants from lands such as Greece, Russia, the Middle East, and the Balkans. In the great wave of immigrations in the 19th and 20th centuries, Orthodox Christians from many lands and cultures came to America in search of freedom and opportunity. Like the first Apostles, they carried with them a precious heritage and gift. To the New World they brought the ancient faith of the Orthodox Church.

Many Orthodox Christians in America proudly trace their ancestry to the lands and cultures of Europe and Asia, but the Orthodox Church in the United States can no longer be seen as an immigrant Church. While the Orthodox Church contains individuals from numerous ethnic and cultural backgrounds, the majority of her membership is composed of persons who have been born in America. In recognition of this, Orthodoxy has been formally acknowledged as one of the Four Major Faiths in the United States. Following the practice of the Early Church, Orthodoxy treasures the various cultures of its people, but it is not bound to any particular culture or people. The Orthodox Church welcomes all!

There are about 5 million Orthodox Christians in this country. They are grouped into nearly a dozen ecclesiastical jurisdictions. The largest is the Greek Orthodox Archdiocese of America, which has about 500 parishes throughout the United States. Undoubtedly, the Primate of the Archdiocese, His Eminence Archbishop Iakovos, has been chiefly responsible for acquainting many non-Orthodox with the treasures of Orthodoxy. His selfless ministry, which has spanned more than thirty years, has been one of devotion and vision. Filled with an appreciation of his Hellenic background and guided by a spirit of ecumenism, Archbishop Iakovos has recognized the universal dimension of Orthodoxy. He has acted decisively to make this ancient faith of the Apostles and Martyrs a powerful witness in contemporary America. 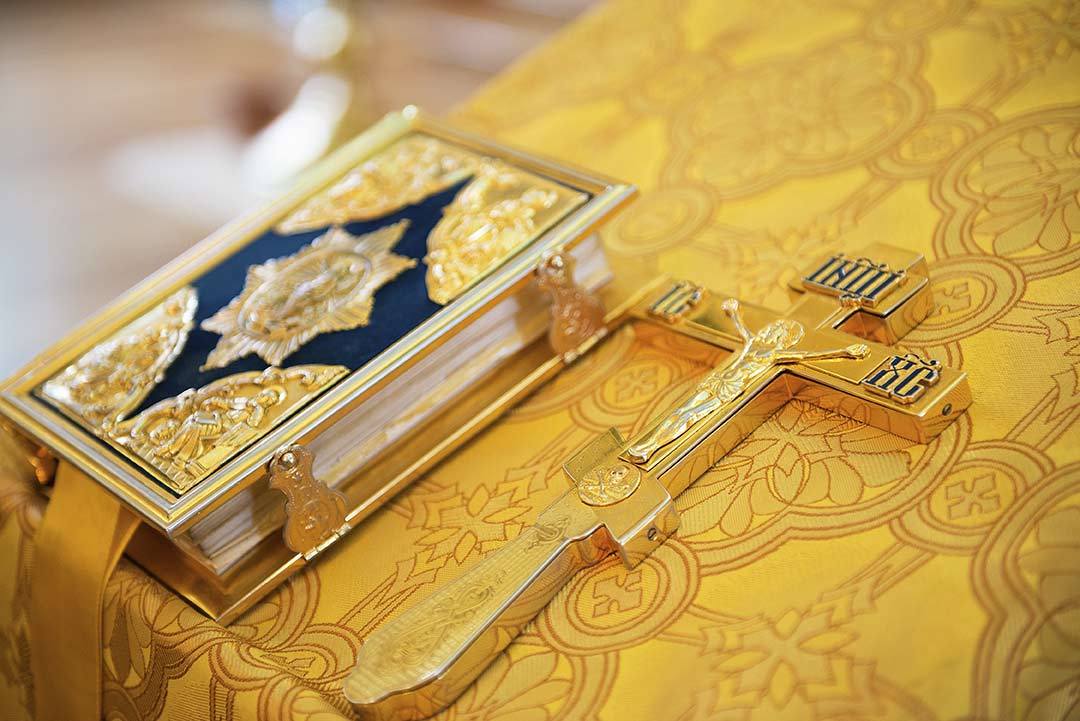 The Orthodox Church embodies and expresses the rich spiritual treasures of Eastern Christianity. It should not be forgotten that the Gospel of Christ was first preached and the First Christian communities were established in the lands surrounding the Mediterranean Sea. It was in these eastern regions of the old Roman Empire that the Christian faith matured in its struggle against paganism and heresy. There, the great Fathers lived and taught. It was in the cities of the East that the fundamentals of our faith were proclaimed at the Seven Ecumenical Councils.

The spirit of Christianity which was nurtured in the East had a particular favor. It was distinct, though not necessarily opposed, to that which developed in the Western portion of the Roman Empire and subsequent Medieval Kingdoms in the West. While Christianity in the West developed in lands which knew the legal and moral philosophy of Ancient Rome, Eastern Christianity developed in lands which knew the Semitic and Hellenistic cultures. While the West was concerned with the Passion of Christ and the sin of man, the East emphasized the Resurrection of Christ and the deification of man. While the West leaned toward a legalistic view of religion, the East espoused a more mystical theology. Since the Early Church was not monolithic, the two great traditions existed together for more than a thousand years until the Great Schism divided the Church. Today, Roman Catholics and Protestants are heirs to the Western tradition, and the Orthodox are heirs to the Eastern tradition.

Christians of the Eastern Churches call themselves Orthodox. This description comes to us from the fifth century and has two meanings which are closely related. The first definition is “true teaching.” The Orthodox Church believes that she has maintained and handed down the Christian faith, free from error and distortion, from the days of the Apostles. The second definition, which is actually the more preferred, is “true praise.” To bless, praise, and glorify God the Father, Son, and Holy Spirit is the fundamental purpose of the Church. All her activities, even her doctrinal formulations, are directed toward this goal.

Occasionally, the word Catholic is also used to describe the Orthodox Church. This description, dating back to the second century, is embodied in the Nicene Creed, which acknowledges One, Holy, Catholic, and Apostolic Church. From the Orthodox perspective, Catholic means that the Church is universal and also that she includes persons of all races and cultures. It also affirms that the Church has preserved the fullness of the Christian faith.
It is not unusual for titles such as Greek, Russian, and Antiochian to be used in describing Orthodox Churches. These appellations refer to the cultural or national roots of a particular parish, diocese, or archdiocese. 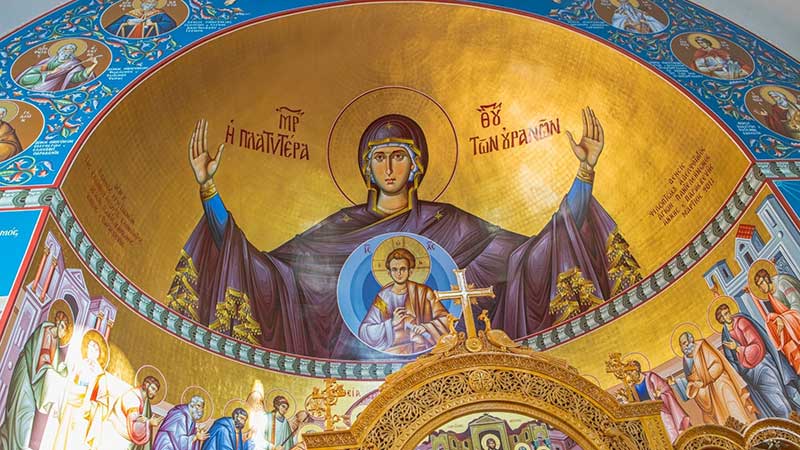 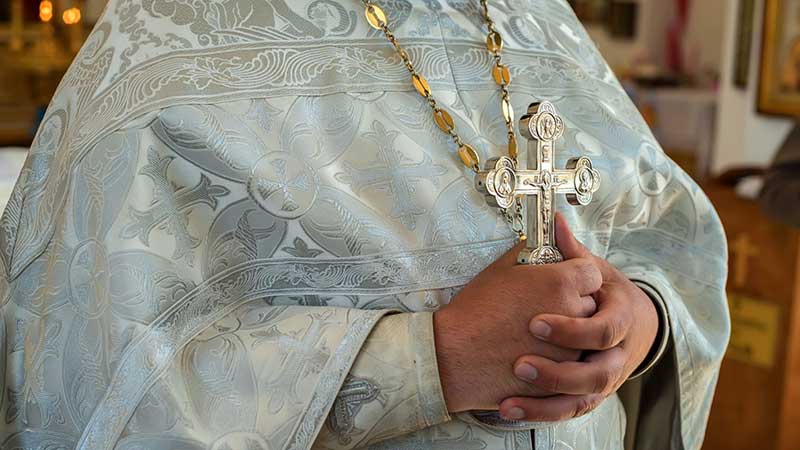 The Orthodox Church is an international federation of patriarchal, autocephalous, and autonomous churches. Each church is independent in her internal organization and follows her own particular customs. However, all the churches are united in the same faith and order. The Orthodox Church acknowledges that unity does not mean uniformity. Some churches are rich in history, such as the Church of Constantinople, while others are relatively young, such as the Church of Finland. Some are large, such as the Church of Russia, while others are small, such as the Church of Sinai. Each Church is led by a synod of bishops. The president of the synod is known as the Patriarch, Archbishop, Metropolitan, or Catholicos. Among the various bishops, the Ecumenical Patriarch of Constantinople is accorded a “place of honor” and is regarded as “first among equals.” In America and Western Europe, where Orthodoxy is relatively young, there are a number of dioceses and archdioceses which are directly linked to one of these autocephalous Churches. For example, the Greek Orthodox Archdiocese is under the care of the Patriarchate of Constantinople. While the Archdiocese enjoys a good measure of internal autonomy and is headed by an Archbishop, it owes its spiritual allegiance to the Church of Constantinople.

Learn more about Orthodoxy
We use cookies on our website to give you the most relevant experience by remembering your preferences and repeat visits. By clicking “Accept”, you consent to the use of ALL the cookies.
Do not sell my personal information.
Cookie SettingsAccept
Manage consent

This website uses cookies to improve your experience while you navigate through the website. Out of these, the cookies that are categorized as necessary are stored on your browser as they are essential for the working of basic functionalities of the website. We also use third-party cookies that help us analyze and understand how you use this website. These cookies will be stored in your browser only with your consent. You also have the option to opt-out of these cookies. But opting out of some of these cookies may affect your browsing experience.
Necessary Always Enabled
Necessary cookies are absolutely essential for the website to function properly. These cookies ensure basic functionalities and security features of the website, anonymously.
Functional
Functional cookies help to perform certain functionalities like sharing the content of the website on social media platforms, collect feedbacks, and other third-party features.
Performance
Performance cookies are used to understand and analyze the key performance indexes of the website which helps in delivering a better user experience for the visitors.
Analytics
Analytical cookies are used to understand how visitors interact with the website. These cookies help provide information on metrics the number of visitors, bounce rate, traffic source, etc.
Advertisement
Advertisement cookies are used to provide visitors with relevant ads and marketing campaigns. These cookies track visitors across websites and collect information to provide customized ads.
Others
Other uncategorized cookies are those that are being analyzed and have not been classified into a category as yet.
SAVE & ACCEPT
Manage Cookie Consent
To provide the best experiences, we use technologies like cookies to store and/or access device information. Consenting to these technologies will allow us to process data such as browsing behavior or unique IDs on this site. Not consenting or withdrawing consent, may adversely affect certain features and functions.
Manage options Manage services Manage vendors Read more about these purposes
View preferences
{title} {title} {title}
Skip to content